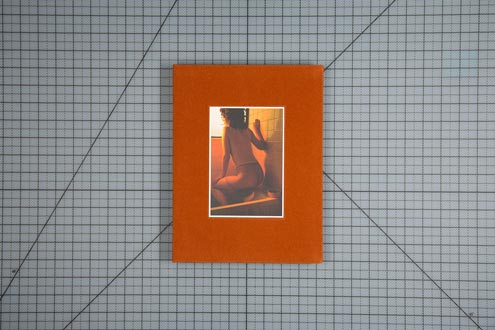 In the first monograph by Mexican photographer Tania Franco Klein, Positive Disintegration, Franco Klein constructs photographs in which she is the director, producer, set designer, and costume maker. A tangible sense of seclusion and separation in the images is reinforced by segmented, full-bleed spreads with images bisected by fragments taken from English newspapers of the decade. The fuzzy, textured, velveteen cover of the book supports the tactility of the spaces depicted in the photographs. The work wistfully evokes the feeling of isolation elicited by the first wave of new technologies and media saturation that became dominant in the 1960s and ’70s. Despite strategically placed visual indicators of the time period, such as rotary phones and television sets, the images feel both timeless and of the current moment. “There is a sense that something has happened, but we’re never quite sure what,” says Milter. “The images function as film stills, but the film only exists in her imagination.”