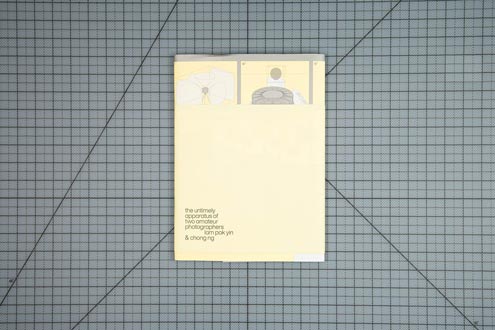 Lam Pok Ying and Chong Ng’s collaborative book, The Untimely Apparatus of Two Amateur Photographers, reconsiders the fundamental elements of photography and what it means to be an “amateur” photographer at a time when making pictures has become increasingly reflexive and pervasive. In an effort to deconstruct the titular apparatus, Lam and Chong build and test three different cameras using unexpected objects such as a mailing tube and a COPAL flip clock. Their commitment to reevaluating the tools of photography is an homage to the early history of amateur photographers, as well as to contemporary theoreticians. The design of the book is as intriguing as the project. The book’s jacket unfolds and resembles a user manual, featuring diagrams and explanations of the built cameras. The book is broken into four sections (A–D), each depicting a different aspect of the project, from the early stages of building to final product shots of the cameras. “From the design to the content, this project challenges us to rethink what we do with photography—and how and why we do it,” states Wiesner.