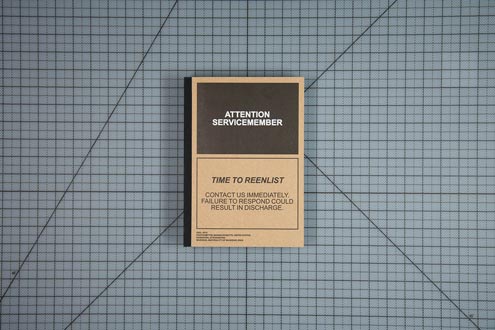 Ben Brody is a former US military photographer, once tasked with creating visual propaganda in Baghdad during the Iraq War. He returned to that essentially deceptive narrative and traveled to Afghanistan to make uncensored photographs as an independent journalist. “Ben Brody’s personal narrative brings a certain authenticity and rawness to the project that is particularly compelling,” says Sawyer. The images within Attention Servicemember are sometimes graphic, occasionally ecstatic, and persistently shadowed by the melancholy chaos of war zones. Brody interlaces snapshots of violence, glossy clips from proselytizing newspaper articles, and portraits as compositionally evocative as their subjects are emotionally elusive. A dizzying, blurry image of a blown-apart leg is followed by a photograph of a soldier feebly cradling a kitten; both moments are viscerally intimate. With a military-document design that is understated instead of campy, this photobook probes the collision point of warfare, media, and a soldier’s deeply personal reckonings with the two.